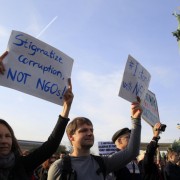 In the eastern bloc of the European Union, political populism is in power and in government, so it seems that Brussels must resort to the threat of legal action against it. The European Commission is sending Poland, Hungary and the Czech Republic to the European Court of Justice for failing to participate in the transfer of refugees from Italy and Greece. Against Hungary, even a number of procedures have begun, also due to the law on non-governmental organizations financed from abroad and universities that are not established in the European Union.

The measures taken by the Hungarian government are limiting the functioning of NGOs and universities, which, according to Brussels, is in breach of European legislation.

“We will pursue this issues if in need be, right until they are before the court. Because they are issues poteining to the application of the EU law and as a guardians of the Treaty we need to make sure that EU low is obliged by member states, stated Frans Timmermans, First Vice-President of the European Commission and European Commissioner for Better Regulation, Interinstitutional Relations, the Rule of Law and the Charter of Fundamental Rights.

A government campaign has negative consequences for many NGOs that help the Hungarians in different areas.

»We can see on surveys that people started to believe in the discreditations of these organisations, while most of these organisations are working on the field and they have contact with people who have housing problems, who have all other issues that the government isn’t really giving solutions for«, said Dόra Papp, Krétakör Foundation.

The most common response among people is discouragement. »I think the biggest fear of people of Hungary is that the everyday problems they are facing won’t be solved. We can see how the react on the scandals of corruption – they would not even raise their voice anymore or go on streets to demonstrate, because they think there is no effect of their activism«, she added.

In Poland, on the other hand, society is deeply divided and dialogue is almost impossible. Barbara Grabowska-Moroz, Helsinki Foundation for Human Rights commented: »In Poland there is no platform of cooperation for the whole society, so I think there are media who support the government and those anti-government. There is no way the two parts of the society can somehow discuss on the issues they are concerned about.

For Brussels, Polish reform is a systematic threat to the rule of law. »It started with the tribunal, then there was the prosecutor’s office. Today the prosecutor general is the office held by the minister of justice. So, the minister of justice who is a politician can handle and give orders to any prosecutor dealing with any investigation. So, at the very beginning there was media, now there is time for court, national council judiciary for the supreme court,” she stressed.

But the Polish parliament confirmed the legislative changes by a large majority.

Link to the broadcast of the Slovene national television.

More Democracy for More Europe – project supported by EU – Education, Audiovisual and Culture Executive Agency. The European Commission support for the production of this publication does not constitute an endorsement of the contents which reflects the views only of the authors, and the Commission cannot be held responsi-ble for any use which may be made of the information contained therein.